ASUS announced at IFA 2019 its new ProArt Series Professional Computer Series. They are made to meet the market demand for powerful laptops, with components made especially for those working in the creative environment. Of course, along with these came some other models, including gaming computers.

The high end of the ProArt series is the StudioBook One, considered the most powerful laptop on the market. It is equipped with an Intel Core i9 processor and an NVIDIA Quadro 6000 graphics chip, the latter being the first graphics card with so much processing power integrated so far on a laptop. According to ASUS, this laptop is dedicated to those who want to work in 3D animation, 8K video editing or use cases where many formulas need to be calculated quickly and efficiently (such as working in the AI ​​field). 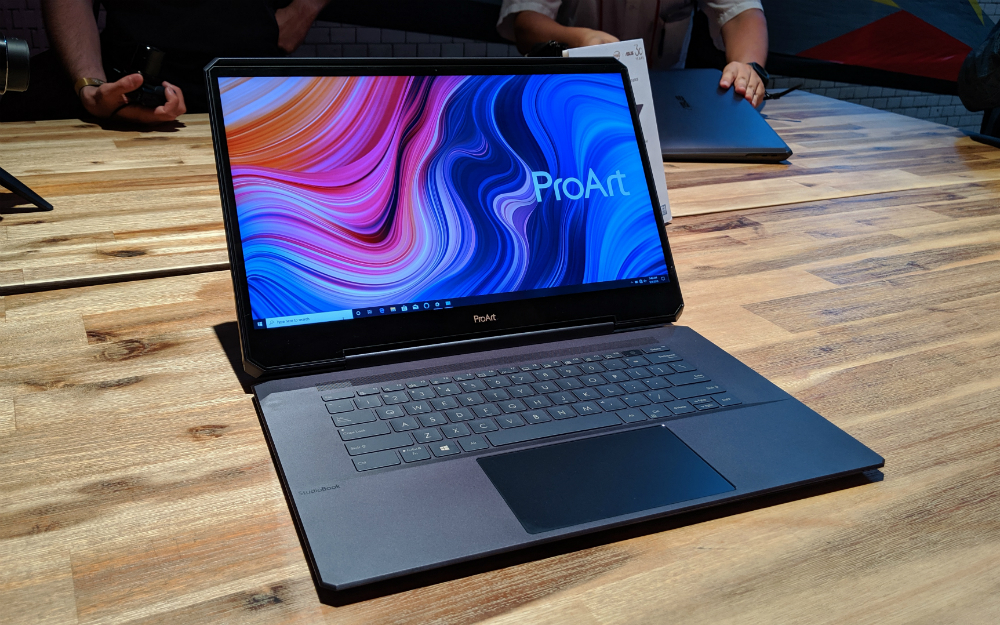 The housing is made of titanium alloy, while the 4K screen is Pantone validated, offering a Delta E value <1. The screen displays at a frequency of 120 Hz and occupies 84% ​​of the computer’s front surface.

The next model on the hierarchical scale is the ProArt StudioBook Pro X. This is the first professional laptop to use ScreenPad 2.0 technology, which includes a full screen in the space where the traditional trackpad is located. It benefits from a 16:10 format screen that covers 92% of the front surface, compatible with 97% of the DCI-P3 color spectrum. 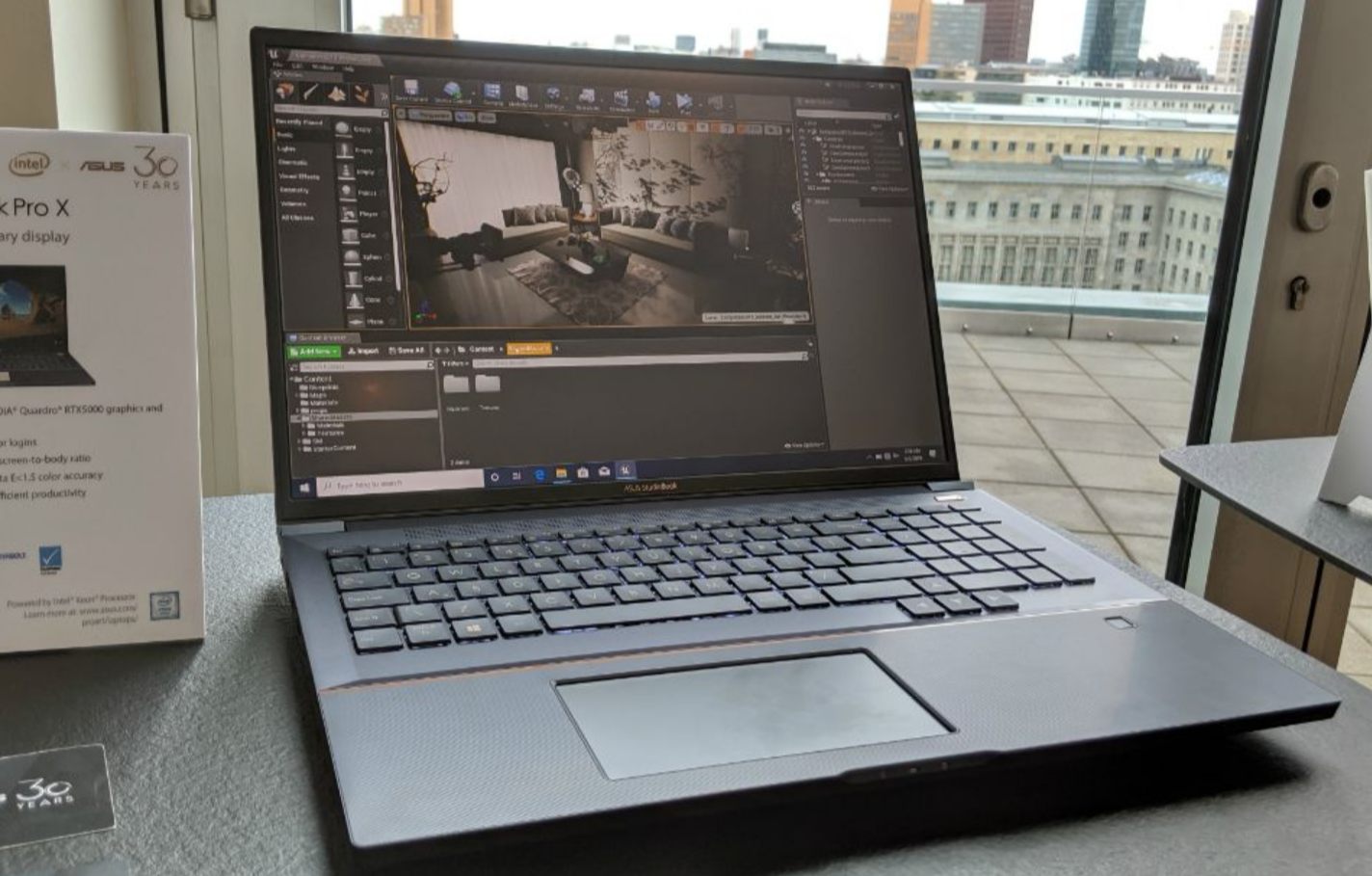 The hardware configuration can integrate either an Intel Xeon or a new generation Intel Core i7 with NVIDIA Quadro 5000 graphics chip and the ability to mount SSDs in RAID0 that provides speeds up to 6 GB/s. ASUS prides itself on an extremely efficient cooling system that does not allow components to reach the temperature limits that would normally affect their performance.

Due to the very thin edges around the display, ASUS StudioBook Pro X offers a 17 “diagonal screen in the body of a 15” laptop.

For those who work exclusively at the office, ASUS has launched a new workstation range computer, with a case of only 8 liters: ProArt Station D940MX. It integrates Intel Core i9-9900K, 64 GB DDR4, the choice of NVIDIA Quadro RTX 4000 or GeForce RTX 2080 Ti, 512 GB SSD and 1 TB HDD, and advanced connectivity ports such as Thunderbolt 3. 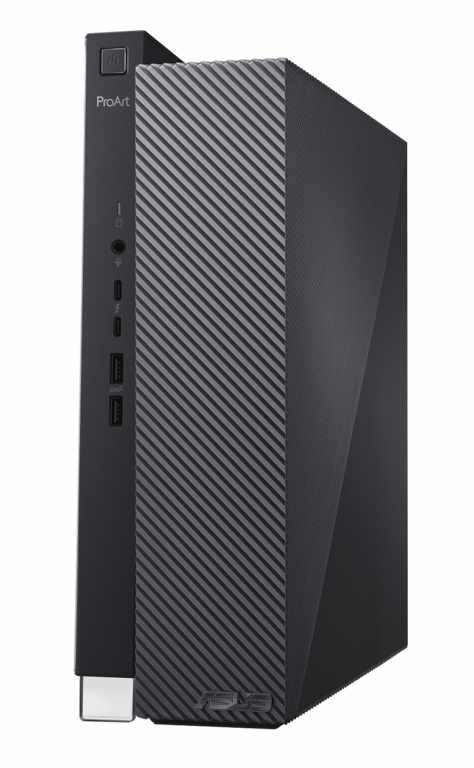 For cooling, the D940MX uses a cooling system with four fans and a steam room, which quickly removes heat from the housing. One of the fans cools the HDD, two the processor and one cools the video card. However, they are not noisy, in full load they produce only 37 dB.

ASUS seems to be starting a race with Apple in the display category. Following the announcement of the US manufacturer’s Pro XDR Display model, ASUS comes with PA32UCG, a 4K HDR model at 120 Hz, specially calibrated for use in the professional environment. It benefits from DisplayHDR 1400 certification from the VESA and boasts a maximum brightness of 1,600 nits.

PA32UCG is made on miniLED technology and benefits from 1,152 individual backlight areas. It is also compatible with HDR10, Dolby Vision and Hybrid Log-Gamma standards. In terms of colors, it is compatible with DCI-P3, Adobe RGB, sRGB, Rec. 709 and Rec. 2020. Of course, this model also offers Delta E <1 color accuracy, each monitor being factory calibrated. 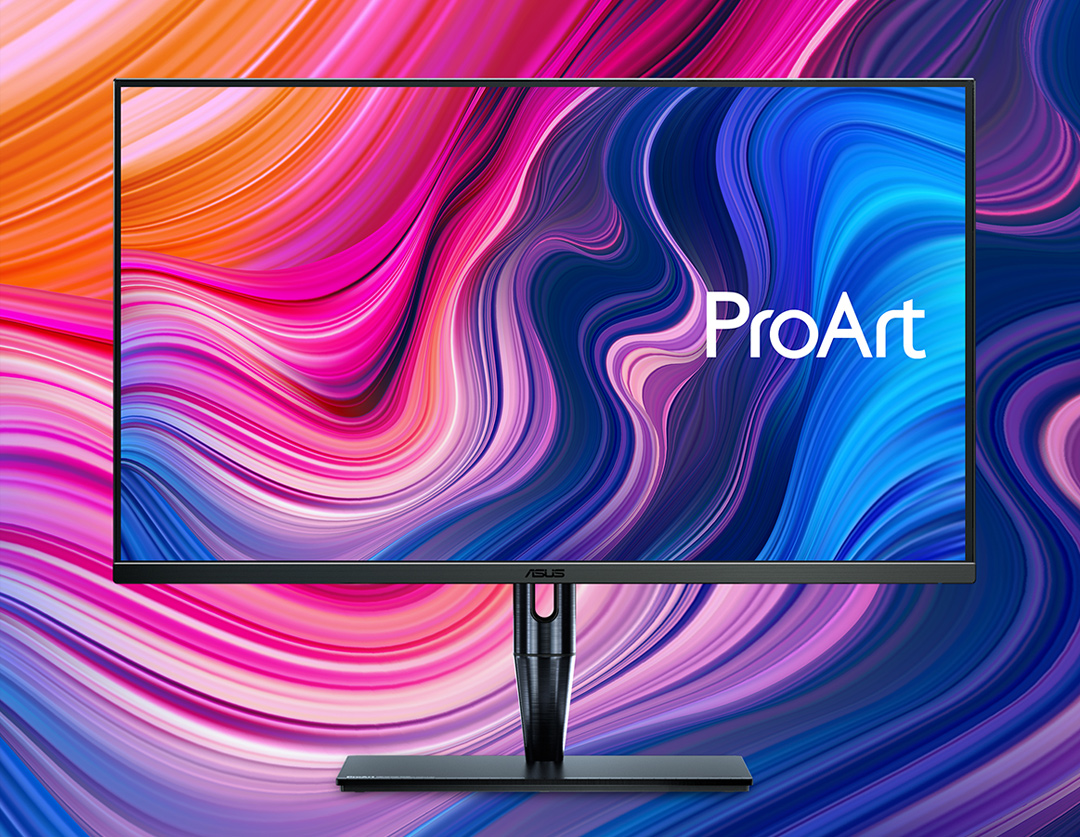 Something we don’t normally find on professional monitors is the use of variable refresh rate technology, but the ASUS ProArt model allows the frequency to be synchronized with the framerate between 38 and 120 Hz. In terms of connectivity, it benefits from Thunderbold 3, DisplayPort and three HDMI ports, as well as standard USB ports.

ASUSPRO B9 is the lightest 14 “laptop in the world right now, offering an Intel Core 10th generation processor, 1 TB of NVMe SSD storage (configurable in RAID) and WiFi 6 in one weighing body only 880 grams. It has a 14 “screen, but its dimensions recommend it more like a traditional 13” laptop. This is due to the 94% body-to-body ratio. 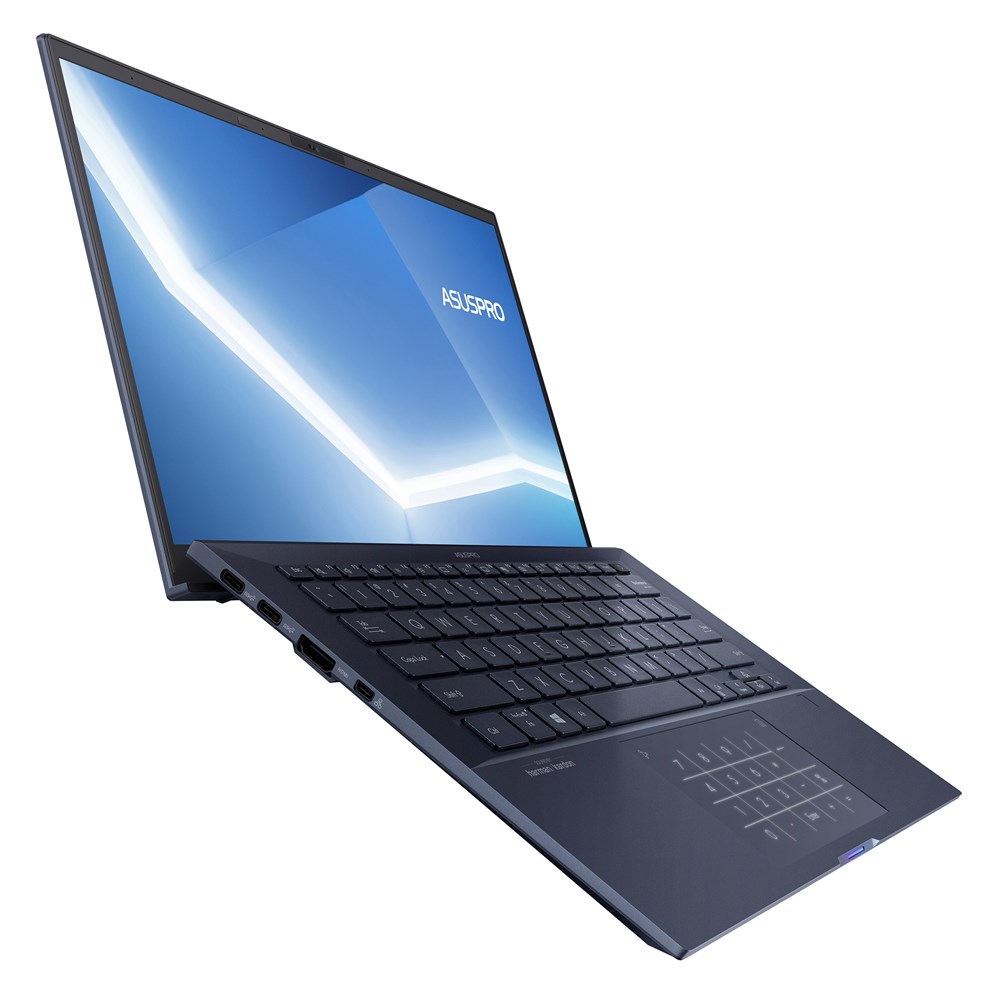 Other interesting things about the ASUSPRO B9 would be the MIL-STD 819G certification, which provides shock and liquid resistance, as well as the infrared camera, which allows biometric authentication through Windows Hello.

VivoWatch SP is the latest attempt by ASUS to enter a more “serious” way in the wearables market. Unlike the company’s past watches, VivoWatch SP focuses on functionality, not necessarily software. It does not use an advanced operating system, but has a multitude of sensors such as ECG, PPG, GPS, altimeter, pulse sensor, and many more. 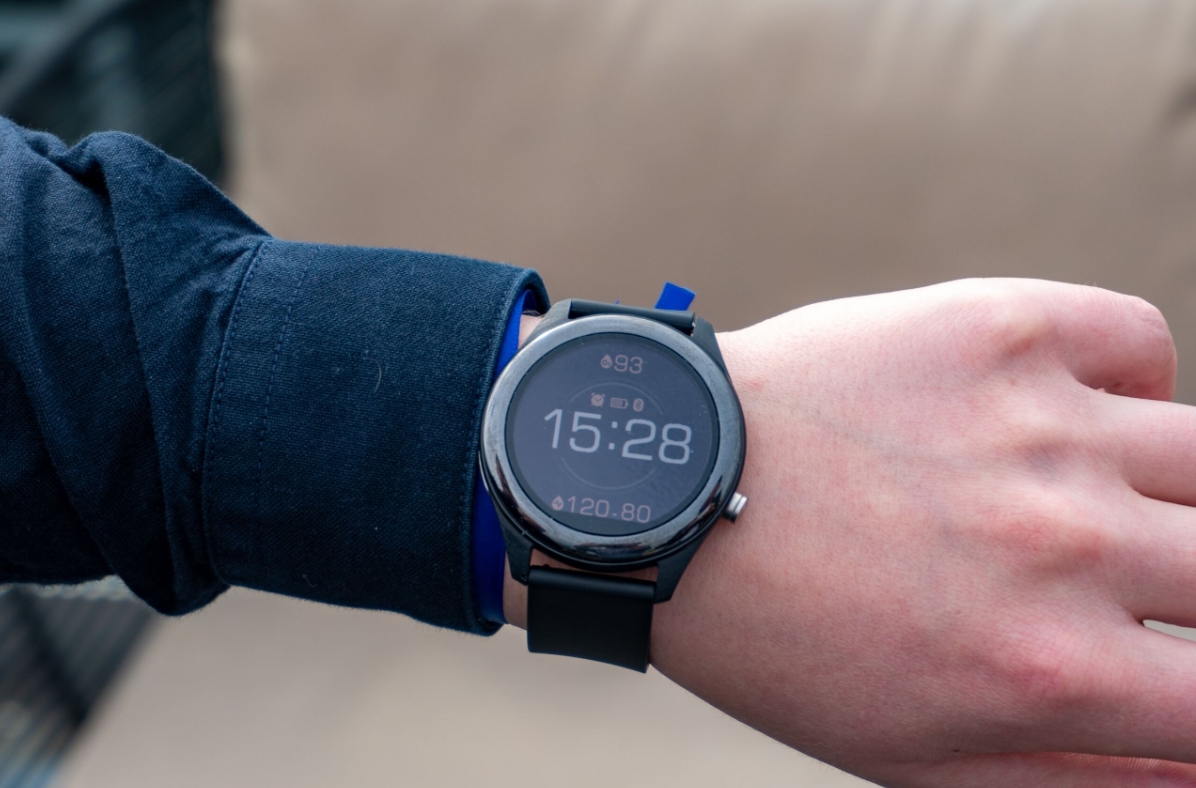 It will be able to measure stress level, blood pressure, can measure oxygen level in the blood and use alerts when it detects something wrong. The watch is water-resistant to depths up to 50 meters and promises a range of 14 days on a single charge. The only disadvantage would be its screen, which uses TFT technology, not OLED.

The ZenBook Pro Duo series also received an upgrade to the IFA 2019. The UX581 features a full-width secondary screen at the top of the keyboard. It is called ScreenPad Plus and can be used as a secondary screen, being equipped with a touchscreen for faster use. 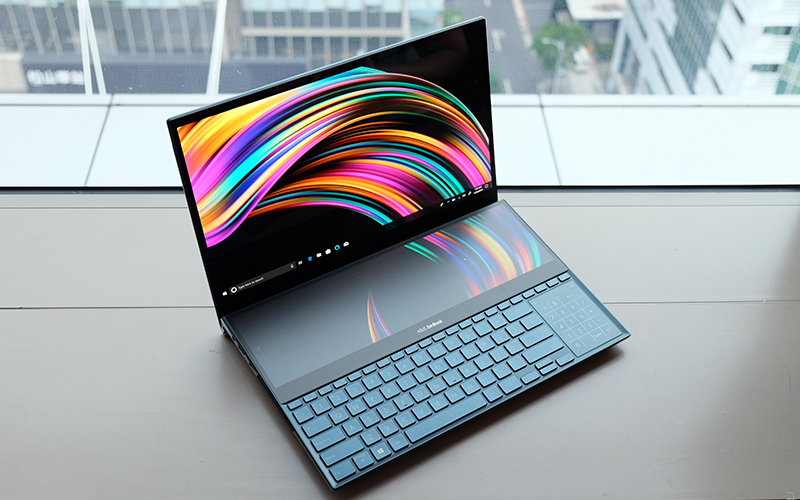 The 15 “screen model uses a 4K OLED panel with Pantone and HDR certification to the DisplayHDR TrueBlack 500 standard, new generation Intel Core processors and NVIDIA RTX 2060 graphics chips. Those who prefer a 14 ”screen model (UX481) will benefit from a FullHD panel with Pantone certification, WiFi 6 and a 10th generation Intel Core i7 processor. The graphics chip for this model is thus an NVIDIA MX250.

The first ASUS ROG laptop equipped with a 300Hz refresh rate display is the Zephyrus S, in the GX502 and GX701 variants. It is aimed at e-Sports fans, promising the best performance on a gaming laptop in the display chapter, with a response time of 3 ms. 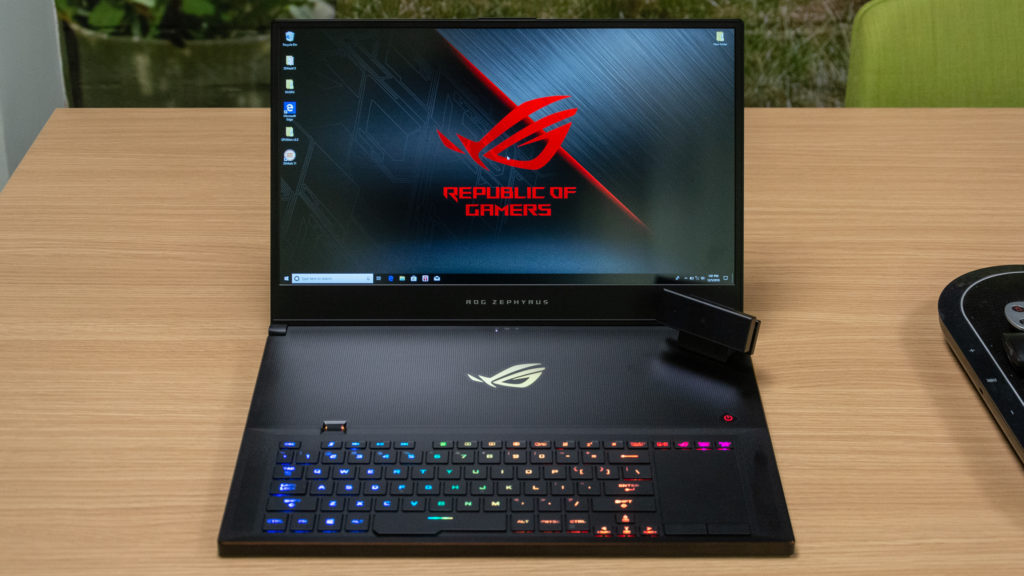 The company promises 300Hz screens on the Zephyrus S GX502 and GX701 variants, G-SYNC compatible models and which have obtained Pantone certification, being suitable even for professionals. The 502 model with 15 “screen integrates an RTX 2070, while the 17” GX701 can climb up to a RTX 2080 with a frequency of 1,230 MHz at 100W consumption.